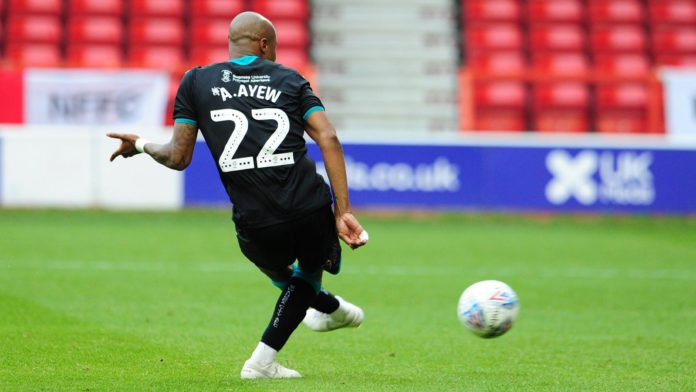 Ghana international, Andre Ayew, was on the scoresheet as Swansea City held Nottingham Forest on Wednesday evening at The City Ground.

The Swans managed to hold the home side to 2-2 away draw in the English Championship.

Sammy Ameobi was Forest’s hero as he twice struck from outside the box to equalise after Swansea had gone ahead.

Andre Ayew’s penalty made it 2-1 at the break before Ameobi’s long-ranger earned Forest a point, with Swansea defender Kyle Naughton seeing red late on.

Sabri Lamouchi’s team needs a maximum of two points from their two remaining games – at Barnsley and at home to Stoke – to secure a first Championship play-off appearance since 2011.

Swansea, who are three points behind sixth-placed Cardiff City, must look to win their last two fixtures – against Bristol City and Reading – and hope the Bluebirds and Millwall slip up.

The stalemate leave Steve Cooper’s side at the 8th position with 64 points.

Ayew enjoyed the entire duration of the match.

The 29-year-old has netted 17 goals in his 43 game outings for Swansea City this season so far.