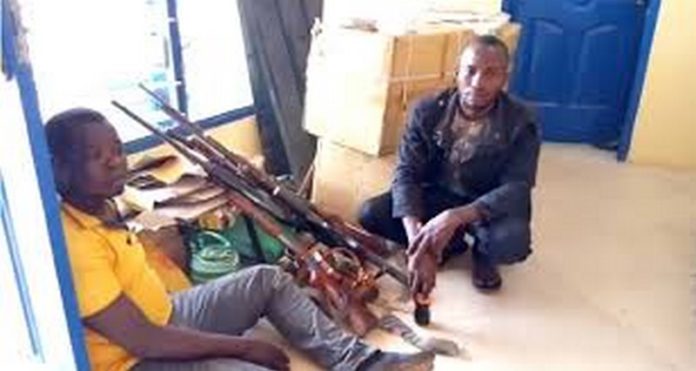 Two unidentified suspects have been arrested by a military patrol team with four locally manufactured guns and other weapons in their possession at Kojokura, a suburb of the West Gonja Municipality in the Savannah Region.

They are alleged to have aided and escorted two fully loaded KIA trucks with people believed to be of Ivory Coast origins and based at Kabilema in the Bole Municipality to go and register at the Kojokura polling station located in the West Gonja municipality.

The two suspects are believed to be among four others providing security for the illegal migrants at Kabilema and hired to escort people to cross over and register, but luck eluded them when the team of the military on patrol duty came across them and handed them over to the Police in Damongo.

Briefing journalists in Damongo, the chairman of the West Gonja Municipal Security Council, Saeed Muhazu Jibreal said the arrest was as a result of a successful intelligence gathering carried out by security forces in the area.

According to him, security forces had discovered that people were being bused to the Kojokura polling station to register despite there being polling stations in the area they were coming from.

“You know there’s a community called Kabilema which is directly located in the Bole Bamboi constituency and there is even a polling station there and so how these people want to come and register in Damongo constituency that was a mystery to us,” he said.

The Chairman said upon further sniffing around they had discovered that one chief from Kabilema had organized warriors to lead the non-residents into the constituency to come and register.

“So we organized our security, the military and the police to go and lay ambush there. Only for them to see two to three truck loads of people , same vehicles that we turned away yesterday coming back to register in that polling station this time with warriors leading them.

“So the military and the police went in, and you can see clearly that kind of ammunition these people were carrying into that polling station to cause mayhem,” he narrated.

Saeed Muhazu Jibreal sent out a strong warning to persons who may attempt to cause skirmishes at polling centres to desist from it, and cautioned the chief from Kabilema that if investigations are able to prove that he had something to do with the bussing of residents he would face the hard fist of the law.

“Anybody, anybody who is going to a polling station with an offensive weapon or anything of that sort would be accosted and the due process will be taken.

“And as you have seen, assuming the Military and the Police were not around at that particular polling station you’d have seen the mayhem these warriors would have caused,” he said.

“But we are sending this signal to that chief at Kabilema that this is West Gonja Municipal Assembly, it is not Bole Municipal Assembly. If we investigate and we find out that he is the one who has sent them, he will also be picked.”

On his part, the Savannah Regional Police Commander, Enock Adutwum Bediako confirmed the incident adding the police were still investigating the matter and will state its stands after that.

The suspects are currently in police custody assisting investigations.