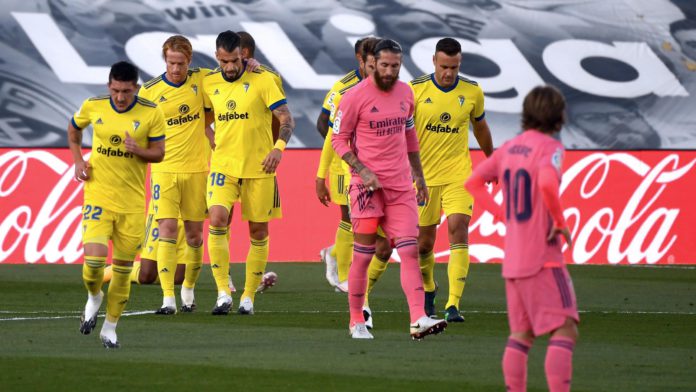 Real Madrid will face Barcelona in the first Clasico of the season next week on the back of a shock 1-0 home defeat to Cadiz.

Zinedine Zidane made a number of changes to his Real Madrid side, with Casemiro and Fede Valverde dropping out having travelled a long distance over the international break and Isco and Lucas Vazquez coming in.

Cadiz came close to taking a shock lead within 90 minutes when Alvaro Negredo had a shot cleared off the line by Sergio Ramos, with Anthony Lozano also spurning a good opportunity to give the visitors the advantage.

Lozano did, however, find the back of the net after 16 minutes, bursting behind the Real Madrid defence following a Negredo knock-down to chip a composed finish over Courtois. It was the least they deserved from a first half they dominated.

Four changes were made by the home side for the start of the second half, with Marco Asensio, Casemiro, Eder Militao and Fede Valverde all introduced as Sergio Ramos was withdrawn with a knee injury.

Even after these changes, Real Madrid still struggled to create much and suffered a defeat that opens the door for Barca to join them at the top of La Liga with a win over Getafe later on Saturday evening.