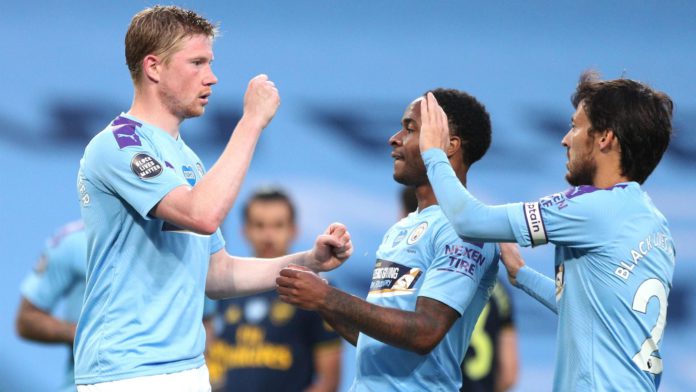 Mikel Arteta endured a miserable return to the Etihad as Manchester City put Arsenal to the sword on a night where David Luiz’s fragilities were exposed.

Luiz – a first-half substitute for the injured Pablo Mari – missed his clearance to allow Raheem Sterling to run in behind the Arsenal defence and break the deadlock on the stroke of half-time, scoring the first goal of the Premier League’s big restart.​

The Brazilian’s night went from bad to worse after the restart when he was shown a straight red for hauling down Riyad Mahrez, with Kevin De Bruyne doubling City’s advantage from the resulting penalty.

An additional 11 minutes were added after Eric Garcia suffered a horrible injury when he was clattered by his own goalkeeper Ederson, and even though City were reduced to 10 men having used all of their substitutes, they finished with a flurry with Phil Foden putting the gloss on a routine victory for Pep Guardiola’s side.

The result means City have strengthened their grip on second place – Liverpool that still need to win two more games to clinch their first Premier League title in 30 years – while Arsenal remain ninth, eight points adrift of the top four.