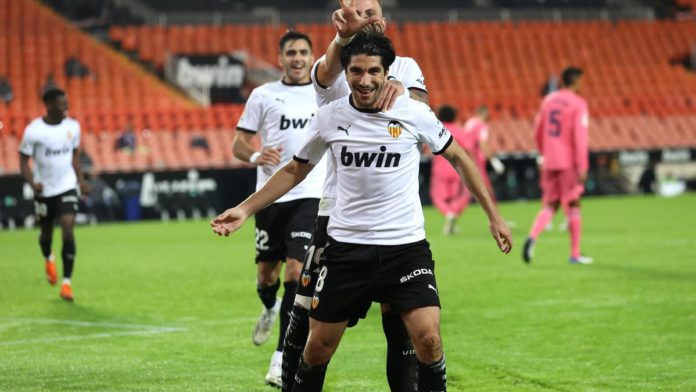 Carlos Soler scored a hat trick of penalties as Valencia inflicted a damaging 4-1 defeat on Real Madrid in a chaotic encounter at Mestalla.

Karim Benzema gave the visitors a first-half lead with a stunner from outside the area, but Valencia equalised in dramatic fashion.

Thibaut Courtois saved a Soler penalty only for Yunus Musah to convert the rebound. A retake, however, was ordered for encroachment and Soler converted at the second attempt.

Raphael Varane found the back of his own net in a calamitous manner just before the break, spinning a clearance up over Courtois. VAR was used to determine the ball had indeed crossed the line.

Marcelo felled Maxi Gomez inside the six-yard box to give Soler another opportunity from the spot, with the midfielder finding the back of the net. And he had a hat trick of penalties soon after following a clear handball by Sergio Ramos.

The result sends Real Madrid into the international break on the back of a heavy defeat, with the capital club sitting in fourth place, four points adrift of early pace-setters Real Sociedad at the top of the table.