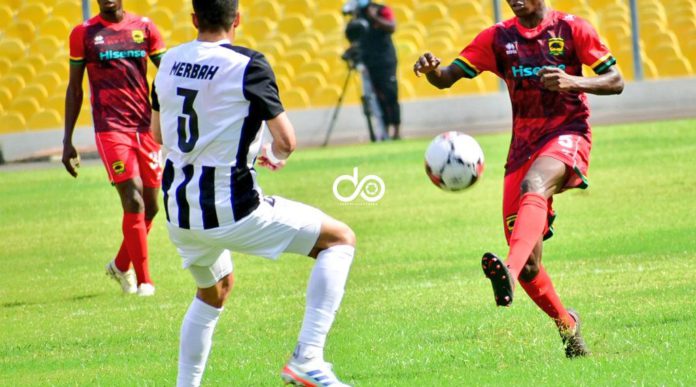 Asante Kotoko lost to Algerian side ES Setif at the Accra Sports Stadium in the first leg of the CAF Confederation Cup play-offs.

The Porcupine Warriors were undone by Kendouci Mohammed’s 81st minute strike in the first leg fixture at the Accra Sports Stadium.

The Porcupine Warriors missed a penalty in the game as Setif secure a 2-1 win ahead of the second leg in Algeria.

Naby Keita had the first chance of the game for Asante Kotoko in the 19th minute but his header missed the post by inches from a corner kick.

Fabio Gama had Kotoko’s first shot on target with his header which went straight into the hands of the Setif goalkeeper Sefian.

Kwame Poku was brought down in the box in the 27th minute but the Cameroonian referee ignored calls for a penalty.

Kwame Poku nearly broke the deadlock in the game for Kotoko but a good reflex from the Setif goalkeeper saw the ball go out for a corner kick in the 32nd minute.

Imoro Ibrahim’s long-range strike in the 43rd minute missed the ball by inches as Kotoko search for an opener with just some few minutes to end the first half.

Just after recess Asante Kotoko had a chance at goal but Fabio Gama missed his kick, which was later followed by Emmanuel Sarkodie but his effort could not trouble the Setif goalkeeper.

The Porcupine Warriors continued to pile a lot of pressure on the Algerians but they were very resolute in defense.

Emmanuel Sarkodie was impeded just some few yards to the Setif goal area and Kotoko were awarded a goal-scoring opportunity. Imoro Ibrahim delivered a poor free-kick which was saved by the goalkeeper.

A nicely worked goal by the Asante Kotoko team saw Kwame Poku break the deadlock for the Porcupine Warriors in the 69th minute of the second half.

Setif got the important goal in the 81st minute from a counter-attack and Kendouci Mohammed made it 2-1 for the away side.

The Porcupine Warriors were awarded a penalty after the ball was adjudged to have hit the hand of a Setif player.

Naby Keita’s spot-kick was saved by the Setif goalkeeper.

The Algerian side held onto the lead. Asante Kotoko will now travel to Algerian for the second game this week.