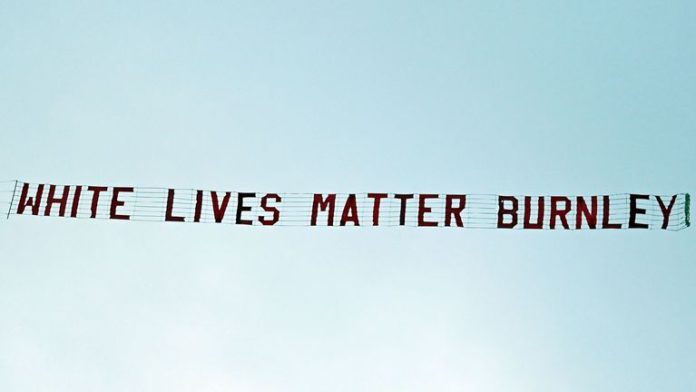 Burnley ‘strongly condemn’ a White Lives Matter plane banner which flew over Man City’s Etihad Stadium at the start of a Premier League game between both sides.

The plane carrying the racist messaging appeared shortly after players from both teams took a knee in support of the Black Lives Matter movement.

There was no indication who had organised the plane and banner, but Burnley Football Club have condemned it.

“Burnley Football Club strongly condemns the actions of those responsible for the aircraft and offensive banner that flew over The Etihad Stadium on Monday evening,” Burnley have said in an official statement.

“We wish to make it clear that those responsible are not welcome at Turf Moor.

“This, in no way, represents what Burnley Football Club stands for and we will work fully with the authorities to identify those responsible and issue lifetime bans.

“The club has a proud record of working with all genders, religions and faiths through its award-winning Community scheme, and stands against racism of any kind.

“We are fully behind the Premier League’s Black Lives Matter initiative and, in line with all other Premier League games undertaken since Project Restart, our players and football staff willingly took the knee at kick-off at Manchester City.

All players in the 12 Premier League games since the restart of the season after the Covid-19 stoppage have worn ‘Black Lives Matter’ on their shirts in place of their names as the league formally joined the international protest campaign sparked by the death last month of George Floyd, a Black man, while in Minneapolis police custody.

White Lives Matter is a slogan which has been adopted by white supremacists in response to calls for racial equality.

Mee: I don’t want to see this

“It was a tough night,” Burnley defender Ben Mee told Sky Sports after their 5-0 defeat to City.

“We can talk about football but there is something I would like to speak about first and that is the plane and banner flying over the stadium.

“I am ashamed and embarrassed that a small number of our fans have decided to fly that around the stadium. It is not what we are about. They have missed what we are trying to achieve.

“These people need to come into the 21st century and educate themselves. They don’t represent what we are about, the club is about, the players are about and the majority of fans are about.

“It is not right. We totally condemn it. These people can learn and be taught what Black Lives Matter is trying to achieve.

“The players have pulled together and this is what we want, what the majority of fans want – equality in society and in football, everything, be it race, religion, gender, LGBTQ community.

Dyche: We can only apologise

“I didn’t realise what had gone on at the beginning,” Burnley boss Sean Dyche said post-match. “Heard noise. Unacceptable. We can only apologise.