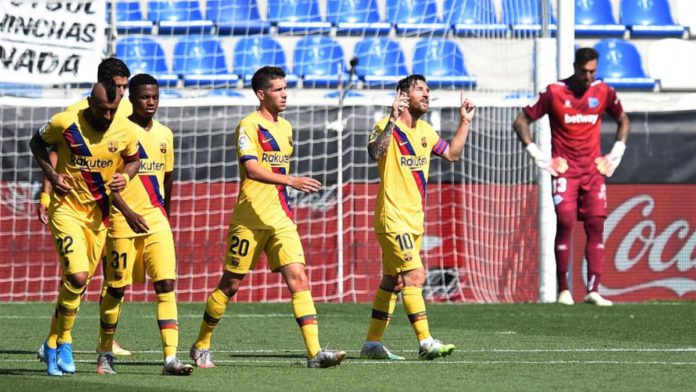 Ansu Fati, Lionel Messi and Luis Suarez all scored as Barcelona completed their disappointing La Liga season with a 5-0 win over Alaves that at least gives them some hope for the future.

This was a dead rubber game with Real Madrid already crowned Spanish champions and Alaves safe from relegation and with no real pressure on them Barcelona turned in one of their best performances of the 2019/20 campaign.

Barca started strongly, hitting the woodwork no fewer than three times in the opening 16 minutes before Ansu finally gave them the lead, finishing off a Messi cross into the middle that was deflected and fell into his path.

The visitors doubled their lead when Messi controlled a Riqui Puig pass and finished into the back of the net. And Barca scored a third just before half time, with Suarez heading home to cap a move that involved Messi and Jordi Alba.

Nelson Semedo was introduced off the bench in the second half and added a fourth to the scoreline, firing past Roberto in the Alaves goal after being set up by Puig, with Messi scoring a fifth from an Alba cross as Barca ended a below-par La Liga season on a high note.