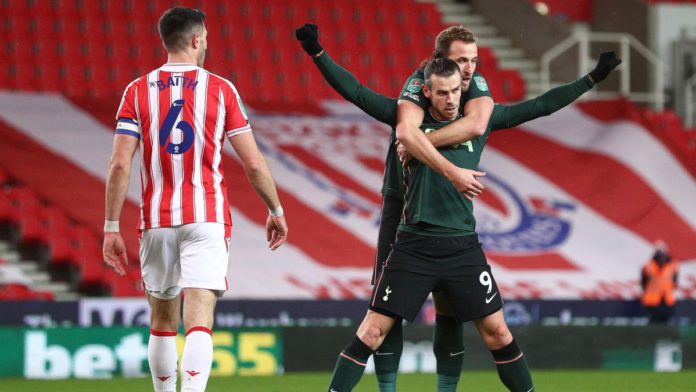 Tottenham Hotspur survived a scare at Stoke City to reach the semi-finals of the League Cup thanks to goals from Gareth Bale, Ben Davies and Harry Kane.

Bale’s goal, only his second since returning to Spurs in the summer, was a clever flicked header from a Harry Winks cross, and put Spurs in control after a largely lacklustre first half.

However, Stoke – who had offered little in the way of goal threat for the opening 50 minutes – gave themselves a chance for an upset when Jordan Thompson drifted off the back of Matt Doherty and smashed home his first goal for the club from close range.

The game opened up as Spurs lost a bit of shape, giving the hosts hope of securing a cup upset. But a rocket of a shot from distance by Davies restored Tottenham’s advantage, before Kane made the game safe with a classy finish as Stoke pushed numbers forward chasing an equaliser.

Jose Mourinho’s side join Brentford and Manchester City in the final four, with one of Everton and Manchester United to make up the semi-final line-up.