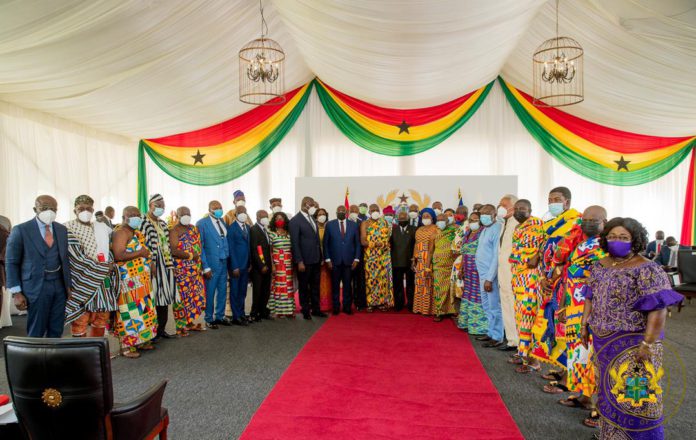 President Nana Akufo-Addo is demanding of the newly constituted Council of State honest and unblemished truth in engagements on matters of the state.

He is convinced the nations democratic credentials will be deepened if the Council goes about its duties of advising the president and other state institutions from an impartial and unbiased position.

The 31-member Council was sworn in as a primary advisory chamber for the president.

Inducting them into office, President Akufo-Addo was hopeful that the Council of State will continue to offer him honest advice, based on unvarnished truth, reiterating that the Council “should not, however, seek to give advice to a President, the effect of which is to undermine the independence of any of the other arms of government, especially the Judiciary.”

With Article 91(3) of the Constitution giving the Council an unfettered remit to advise other bodies like Parliament or any other public authority, the President underscored that “this is not meant to be a busybody’s charter, but, on matters of significant national importance, the Council can let its views be known.”

The President urged the Council of State to recollect at all times the changed nature of the political environment in which the country is currently operating.

According to President Akufo-Addo, the decision of the Ghanaian people on 7th December 2020, to create virtual equality of representation in Parliament imposes on the principal actors of the State, an obligation to seek consensus in public undertakings.

“The Council of State is well-positioned to contribute to this development,” he added.

The President, thus, welcomed a vigorous exchange of ideas between the Presidency and the Council, adding that: “It is my fervent wish and hope that this Council will help enrich the second term of my presidency for the benefit of the Ghanaian people so that, together, we can help realise the dreams of the founders of our nation to build, under God, a free, democratic, united, prosperous and happy Ghana, the Black Star of Africa, on the principles of democratic accountability, respect for human rights, the rule of law, and the dictates of social justice.”

With the Council having a broad scope of advisory functions in counselling the President, including in the sensitive exercise of creating new regions, President Akufo-Addo was expectant that the Council will get to work rapidly and efficiently to enable government function satisfactorily.

“Members of the Council, you have been sworn into office at a difficult time in the history of our nation, and indeed, of the world. We are confronted with the ravages of COVID-19, which have affected the lives and livelihoods of all Ghanaians. Through proactive measures put in place by government, we have seen a rebound in economic activities,” he said.

The President continued: “However, these gains are now being threatened by the rising number of active cases in the so-called second wave that is sweeping the world. Winning the fight against the pandemic remains a collective duty and responsibility, so I appeal to you to help in this endeavour.”