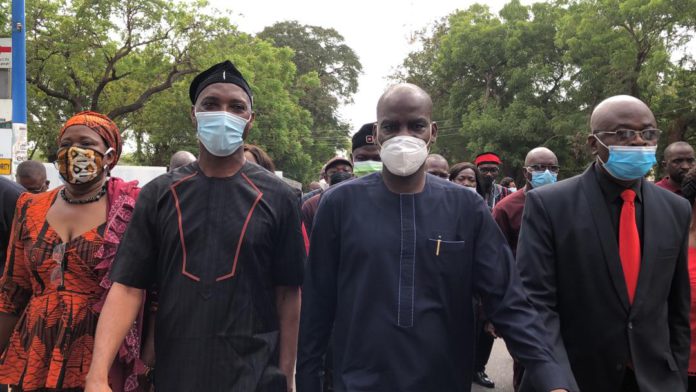 The Minority in Parliament has promised to boycott the Electoral Commission’s (EC) next appearance before the house.

This comes after they were prevented by police officers on Tuesday when they embarked on a march to present a petition to the EC boss, Jean Mensa.

Clad in red and black clothing, the opposition MPs walked in a group towards the headquarters of the Commission, at Ridge in Accra.

Minority Leader, Haruna Idrissu who read the content of the petition noted that since their petition was ignored by the EC, they will also refuse her audience when she appears before Parliament.

He stated that the MPs of the National Democratic Congress (NDC) are still in contention of the declared results.

This he claimed is because there was an absolute lack of transparency in the collation process of results in the Techiman South district.

“The results of the elections have been changed six times by an embarrassing Chairperson, so next time she comes to do her correction, we will not accept it.

“We are asking that the Techiman South results are collated openly in the full glare of the public,” the Tamale South MP added.

After their failed attempt, Mr Idrissu demanded that one of the police officers received the petition on behalf of the EC.

The Minority MPs have also said they will boycott the inauguration of President Akufo-Addo for a second term should a re-collation of the parliamentary results in Techiman South is not done.

Mr Iddirisu told Joy News that the NPP’s Martin Agyei Mensah Korsah who was declared winner was not deserving of the seat since the NDC’s candidate won.