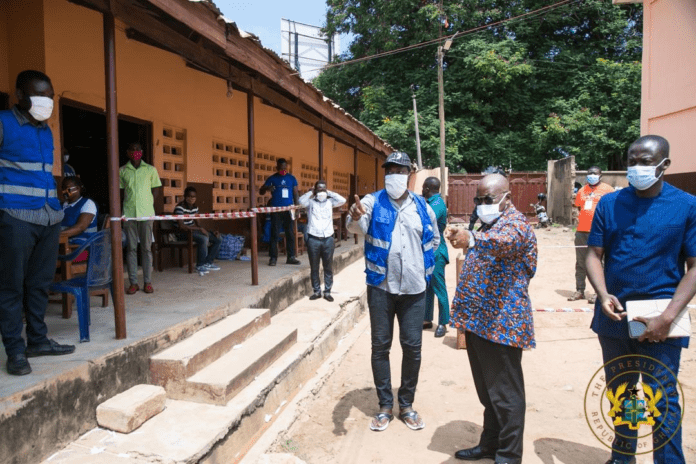 President Nana Addo Dankwa Akufo-Addo has assured Ghanaians that the upcoming parliamentary and presidential elections will be peaceful.

The President gave the assurance when addressing the chiefs and people of Bamiankor in the Nzema East Municipality of the Western as part of day one of his working visit to the Western Region.

“Whatever my government will have to put in place to make election 2020 peaceful will be done in Ghana, we don’t want any violence, the election is about sharing of ideas and not about mayhem” President Akufo-Addo promised.

He intimated that some individuals and groups have the propensity of creating chaos but that will not be entertained under his watch.

The President and his entourage toured five Constituency in the Western Region which includes Ahanta West where he cut the sod for the construction of a 3.5kilometer road from Akyernyin Nkwanta to the Egyam grotto a catholic spiritual renewal center.

In the Nzema East Municipality, the President inspected the ongoing Axim sea defence and the fish landing site as well as commissioned a community mining at Gwira Bamiankor and inspected road projects.

Again at Ellembele, the President inspected the much-talked about Essiama- Nkroful road and cut sod for other road projects in the district.

In the Tarkwa-Nsuaem Municipality, the President Akufo-Addo cut sod for the commencement of Nsuaem senior school and commissioned a community mining

The President’s day one working visit ended at Aboso where he again commissioned a community program and cut sod for a gold processing plant as well.