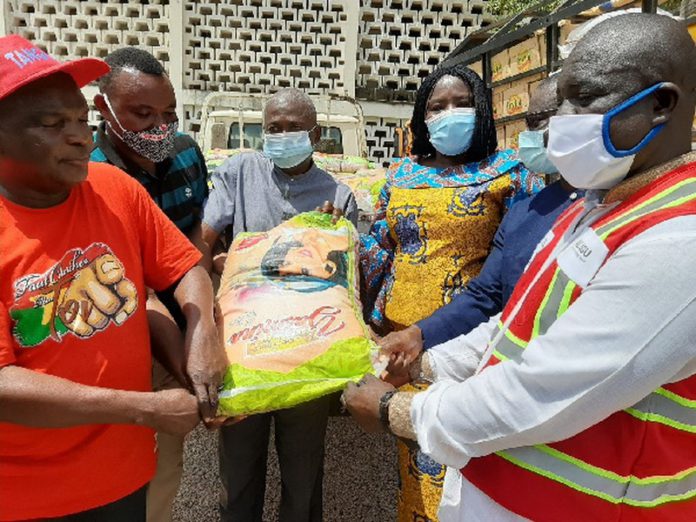 The Volta River Authority (VRA) and the Northern Electricity Distribution Company (NEDCo) have presented assorted food items worth about GH¢350,000 to the National Disaster Management Organisation (NADMO) to support flood victims in the Upper East Region.

Recent torrential rains in the Region submerged many farms and bridges, and cut off link roads to some communities, especially in the Bawku and Kassena-Nankana Municipalities and the Bawku West District.

The food items, including 650 bags of rice, 210 bags of sugar, 260 cartons of milk and 210 cartons of cooking oil, were presented to Madam Tangoba Abayage, the Upper East Regional Minister.

Mr Osman Ayuba, the Managing Director (MD) of NEDCo, who presented the items on behalf of the Chief Executive Officer of VRA, noted that the spillage of the Bagre Dam and the heavy rains had affected residents, especially those who lived near the river bodies.

He said VRA and NEDCO were concerned about the welfare of the affected people and look forward to the construction of the Pwalugu Multi-Purpose Dam.

“So we have come to make our humble donation to the Regional Minister to be given to NADMO for onward distribution to the affected people,” Mr Ayuba said.

Receiving the items, Madam Abayage thanked the officials of VRA and NEDCo for the donation to the Region and gave the assurance that the items would be given to the affected people.

She, therefore, called on the NADMO officials not to concentrate their attention on distribution of the items to only affected persons near the river banks, but also extend the distribution to communities where people had suffered losses.

She said the Region lost four people to the floods and emphasized the need for the construction of the Pwalugu Multi-Purpose dam to conserve the water which destroys lives and properties annually.

“We are wasting water and it is costing us lives and property, this is the most important reason I think the construction of this dam is needed,” the Minister, who is also the Parliamentary Aspirant for the Navrongo Central Constituency said.

Mr Jerry Asamani, the Upper East Regional Director of NADMO, expressed gratitude to the leadership of the VRA and NEDCo for the support to the flood victims in the Region.

He said NADMO would ensure proper distribution of the items.