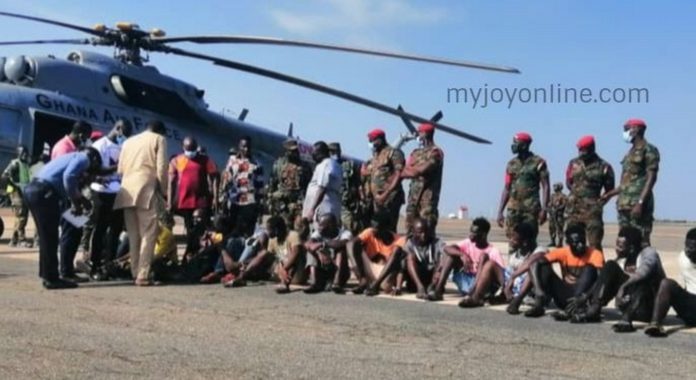 Lawyer for the 31 suspects arrested in connection with the revolt that ensued in the Volta Region last Friday said his clients are victims of wrongful arrest.

Theophilus Donkor said the persons had no hand in the unrest which resulted in the death of one person during which roads were blocked impeding free flow of traffic in and out of the region.

The suspects are alleged to be members of the Homeland Study Group Foundation (HSGF) secessionists, who had also attacked the Aveyime and Mepe police stations in the North Tongu District demanding that the region be an autonomous country known as Western Togoland.

They have been slapped with five charges by state prosecutors at an Accra Circuit court on Monday.

Their pleas were not taken as state prosecutor ASP Sylvester Asare informed the court the state wants them remanded into custody to aid investigations.

But speaking on Joy FM’s Top Story, the lawyer argued that many of the persons in police custody were oblivious of the happening when they were picked.

He told Evans Mensah that some of them were going about their normal duties at the time the security operations were conducted.

“These 31 persons that are before the court have never had any relationship with the secessionists and nobody has contacted them.

“Some of them do not even know that the exists a group such as Western Togoland or a secessionist group like that exists because they are illiterates , some are lay persons,” he said.

He revealed that “the only lady among them was 19 years who is an apprentice going about her normal duties when she was apprehended.”

Lawyer for the accused persons made an application for bail but this was rejected by the court.

They are to re-appear in court on October 13.