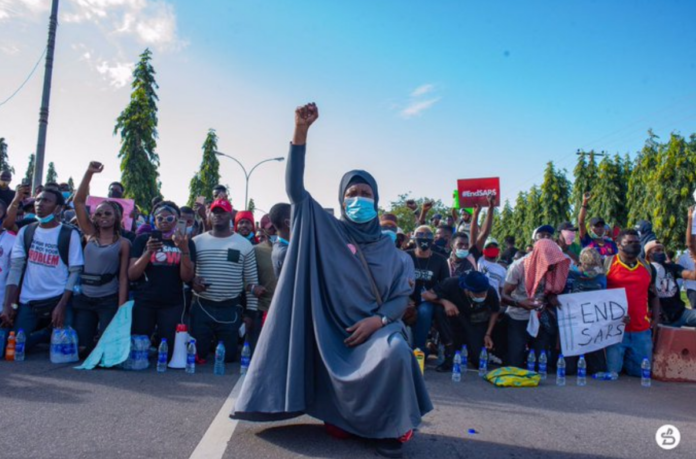 For days now, hundreds of Nigerians have taken to the streets to demand an end to police brutality.

The development was triggered after a viral video of a man allegedly being killed by the force’s Special Anti-Robbery Squad (SARS) went viral on social media.

SARS is a branch of the Nigerian police under the Criminal Investigating Department (CID) instituted to stem crime.

But the citizens say the wing, which was established to fight armed robbery, kidnapping and communal clashes, has overstepped its boundaries and is now abusing its powers.

However, the most unlikely of unsung heroes have been thrown into the mix – the Ghana Police Service.

Amid the protests and online solidarity on social media, an experience with the Ghana Police Service shared by a Nigerian seems to have resonated with many foreigners who are calling for the approach to be emulated in the Fatherland.

Adedoyin Debbie wrote on Twitter; “No jokes, the first time I saw Ghana Police and they stopped us on our way back to our Airbnb apartment around 2 am, they were so polite. I was asleep and the Police woke me up to be sure that I wasn’t kidnapped or something, after he confirmed he let us go. I felt safe in Ghana.”

This single tweet has triggered a tirade of messages of similar experiences encountered has flooded the timelines on the social media platform with many describing the security agency as a force to reckon with.

The Ghana Police Service has had its own challenges in the discharge of its duties in recent times. On the back of this, the agency in February 2018 launched a transformational programme designed to build a world-class Police Service capable of dealing with traditional and emerging crimes.

Two years down the line, the results of the strategy seems to have been felt overseas through the praise showered from the country’s Nigerian compatriots.

As the struggle to end police brutality in Nigeria rages on, it is the hope of many Ghanaians and Nigerians alike that the movement stays alit to ensure that the reforms needed to streamline and birth a humane police force materialise.