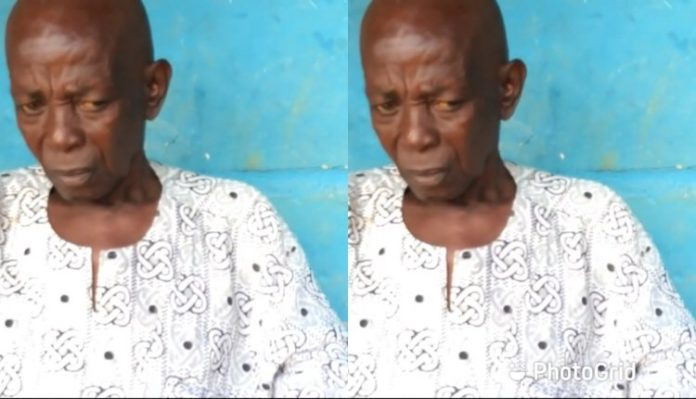 It was a sight worth seeing when father of late highlife musician, Kofi B, appeared after the completion of his funeral rites.

The singer’s biological father, Kwabena Krah Boakye, has returned home after over 30 years of being presumed dead in Côte d’Ivoire.

The father, who travelled to seek greener pastures, was reported dead in violence after a football match between Kotoko and Asec Mimosas as far back as 1993.

But, an evening after the burial, a neighbour brought Mr Boakye home, after he asked for directions.

The astonished family confessed they mistook him for a ghost or stranger until they saw his name tattooed on his hand, and how he correctly answered some questions posed to him.

Filling them in on his life during his absence, Mr Boakye, who suffers partial amnesia, narrated how thieves robbed him and forced him to live in misery.

He added he had no option than to sleep at lorry stations in one of the border towns, until a good Samaritan spotted him.

After narrating his plight to the said woman, she agreed to help him locate his family in Ghana and paid his travel fare.

Emotional moment as Kofi B is laid in state [Video]

That was how he found his way to Agogo and days after seeking directions he arrived home safely.

Mr Boakye is now believed to be in his mid seventies.

Some family members, who spoke to Kofi TV, believed Kofi B’s ghost took the form of the Samaritan to end his father’s long-standing ordeal.